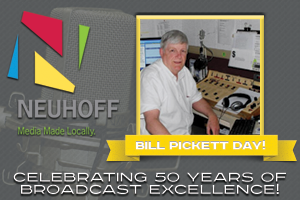 On September 20th 1968 a large explosion rocked downtown Danville. It would claim two lives and change many others.  18-year old Bill Pickett was at Danville High School helping behind the scenes of a football broadcast.  When the building shook and the night sky lit up, he was told to grab the remote truck, race to the scene and tell the audience what he was seeing.  That’s how the broadcast career of Bill Pickett began and it hasn’t stopped for 50-years.

We honor Bill as he reaches this impressive milestone.  Bill has told the story of thousands of board meetings, trials, community events, school activities, lifted up community heroes, shared our joy at victories and provided the facts of defeats.   No person has a longer career as a broadcast journalist in Vermilion County. No individual has said “so much to so many” since 1938 went the first radio station when on the air in Danville.

He has received local, state and national awards for his work.  Bill has interviewed mayors, county chairman, state reps and congressmen, state and US senators, governors, vice presidents and presidents along with all five of our Hollywood stars.  Bill has covered four wars at home, political conventions from the floor and a space shuttle launch from the Cape.  Ask Bill his favorite stories and he would say the ones that feature ordinary folks doing extraordinary things in his home town. Bill Pickett, 50-years of broadcast excellence in Danville!