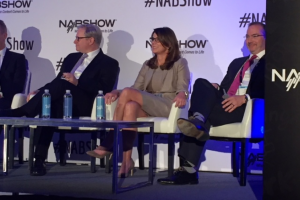 Beth Neuhoff, CEO/President of Neuhoff Communications, participated on a panel Tuesday, April 9that the National Association of Broadcasters (NAB) Radio Show in Las Vegas that discussed the relationship between broadcasters and the Department of Justice (DOJ).

Over the last few decades broadcasters have focused primarily on the FCC reforming its ownership rules the DOJ has emerged as one of the biggest obstacles to broadcast combinations. One critical point of contention is how DOJ defines the relevant market. A few of the topics discussed during this panel were with whom do broadcasters compete? More specifically, are Google, Facebook and Netflix real or imagined competitors, do streaming services compete with radio stations, and are broadcasters’ ad prices constrained by non-broadcast services? To date, DOJ – and even the FCC – have answered these specific questions with a resounding “no.”

The esteemed panel made up of one broadcaster and several lawyers further discussed how the DOJ approaches broadcast mergers and possible areas for reform.

For more information on the panel and the NAB Radio Show visit: