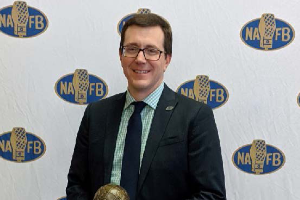 Bridge won the award based on his series of reports for WFMB AM/FM and This Week in Agri-Business while in China in 2016. Bridge aired more than two dozen reports that he filed from China for both radio and television. These included interviews with the U.S. Ambassador to China, Terry Branstad, to reporting on how Chinese farmers use smart phone apps to broker agriculture commodities to new markets.

General Manager, Kevin O’Dea, adds, “This is a big deal and we are proud of the work Steve does. As we always say, ‘Media Made Locally’”