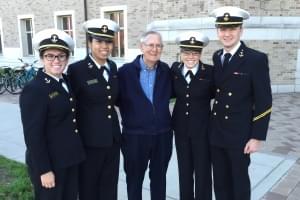 The last WWII veteran on staff of Neuhoff Media, Fowler Connell was honored recently by the Kenneth D. Bailey Academy in Danville Illinois by being placed on the “Wall of Honor” for his military service.  A member of the US Navy from 1943 to 1946, Fowler served on the USS Boston in the Pacific.  His ship survived kamikaze attack as well as a typhoon during its time at sea.  When the war ended, it was with Fowler’s ship anchored off the USS Missouri in Tokyo Bay on an August day in 1945.   Before leaving Japan and returning the United States, Fowler had the opportunity to visit the southern port city of Nagasaki.  This 21-year old kid from Kansas City saw with his own eyes the surrender of Japan and the destruction of the a city by an atom bomb.

The 2019 Wall of Honor recipients were honored for their community values and exemplary military services during a dedication ceremony on Tuesday, November 12th. Among the three recipients was Neuhoff Media Danville’s sports broadcaster, Fowler Connell. Fowler returned home from his military service to become a highly respected sports reporter and broadcaster.

Mike Hulvey, Neuhoff Media’s COO/Vice President, stated, “He is the most remarkable person. Thank you Fowler for your service to the country and as a member of the Greatest Generation!”

The other award recipients included Frank Atwood and Frank McCullough.  They were nominated to receive the award which recognizes those who not only served their country but have also demonstrated strong community values.