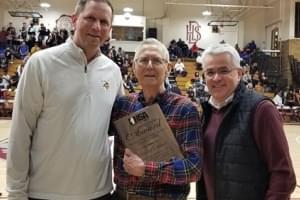 The IHSA Distinguished Media Service Award was created to recognize media members who have covered high school sports and activities in Illinois for a significant period of time, while maintaining perspective on the amateur events they report on.

“It is hard to come up with adjectives to describe this group,” said IHSA Executive Director Craig Anderson. “Having lived and been a high school Athletic Director near Peoria for much of my life, I know firsthand the impact that Bob Leavitt has had on high school sports in the region. Then you look at the sheer longevity and loyalty that Fowler (Connell) and Neal (Ormond) have displayed, it really is incredible. Both men have given back so much, and are rightfully revered in their respective communities.”

The IHSA’s media advisory committee, and a veteran committee of retired media members voted on each nominee. Those who received the required percentage of votes were named honorees with a limit of one winner per IHSA Board Division. Each winner will be honored at a high school event of their choosing during the 2019-20 school year.

“A vital element of this award is the recognition within the community,” said IHSA Assistant Executive Director Matt Troha. “We look forward to seeing this year’s winners being recognized in front of the students, coaches, and communities they have impacted with their exceptional work.”

Fowler’s award presentation took place on Tuesday, January 14th at the Danville High School Viking’s boys varsity basketball game. The award was presented by Danville High School Athletic Director, Mark Bacys, who nominated him for the award.  During the presentation, Fowler said “I’ve been in the sports business a long time, and I certainly appreciate this award.”